A “GREEN” RESORT IN THE HEART OF UMBRIA

The Gallano Castle stands on the mountain of the same name in the Valtopina, between Assisi and Spoleto,  520 meters above sea level. Set like a diamond between two wonderful protected parks, the Monte Subasio Park and the Colfiorito Park.

IDEAL FOR HIKING TRAVELERS AND FAMILIES

With its vast terrain, rich in olive trees, vines and spring waters, it is one of the most sought-after Umbrian destinations for hiker travelers. An authentic medieval village to accommodate couples as well as families and groups of friends looking for unique flavours, such as the precious Truffle in the Topino valley is the protagonist, in addition to relaxation and the discovery of ancient traditions and activities.

The Castle, today transformed into a resort with tourist apartments equipped with all comforts, restaurant, is the ideal place for a holiday in the heart of Umbria. Gallano Resort it is a historical complex, part of UNESCO, protected by the Ministry of Cultural Heritage.

Positioned in a pristine landscape, with a panoramic view over the wide valley, the Castello di Gallano Resort is composed of a widespread village divided into three complexes Borgo, Veduta Sasso and Castello, each divided into several independent apartments.

Gallano is also a perfect place for celebrating special occasions like weddings, or setting successful events such as conferences, meetings, seminars and incentives. 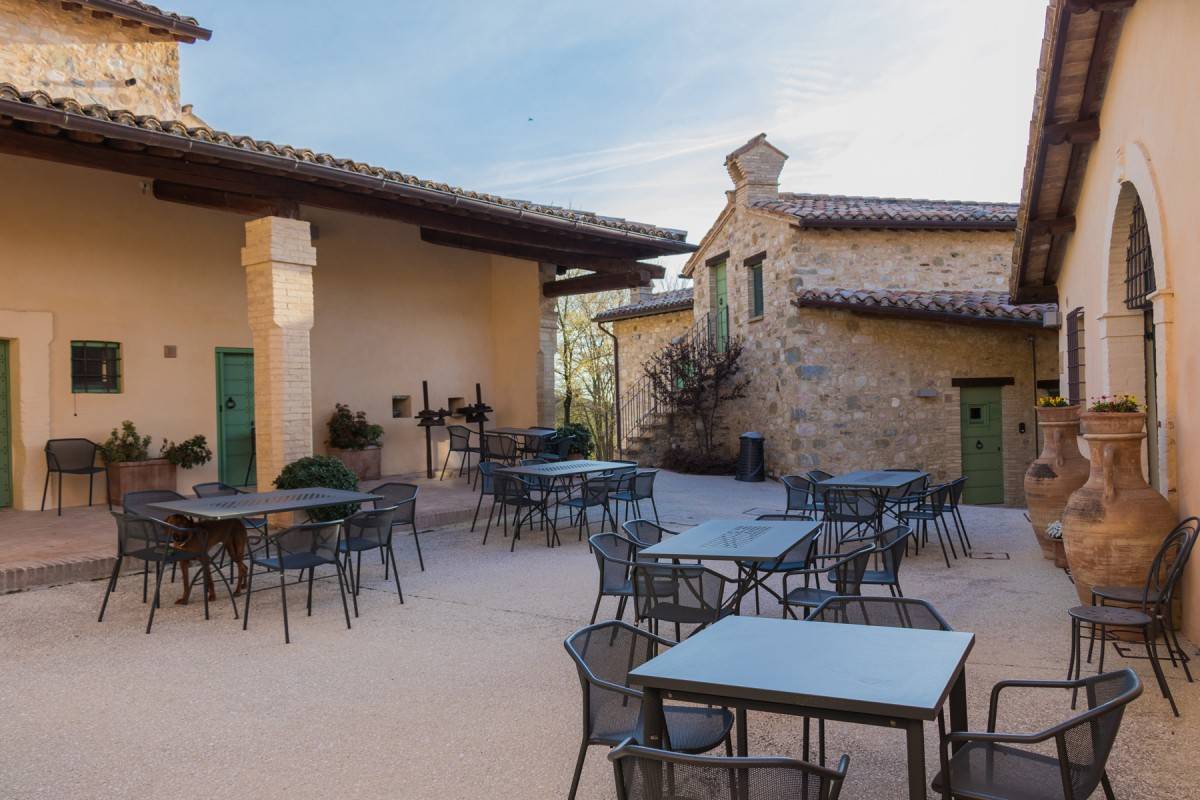 At the entrance of the Borgo of Gallano, where you can find Reception, Gallano Restauran and the church of San Luigi. 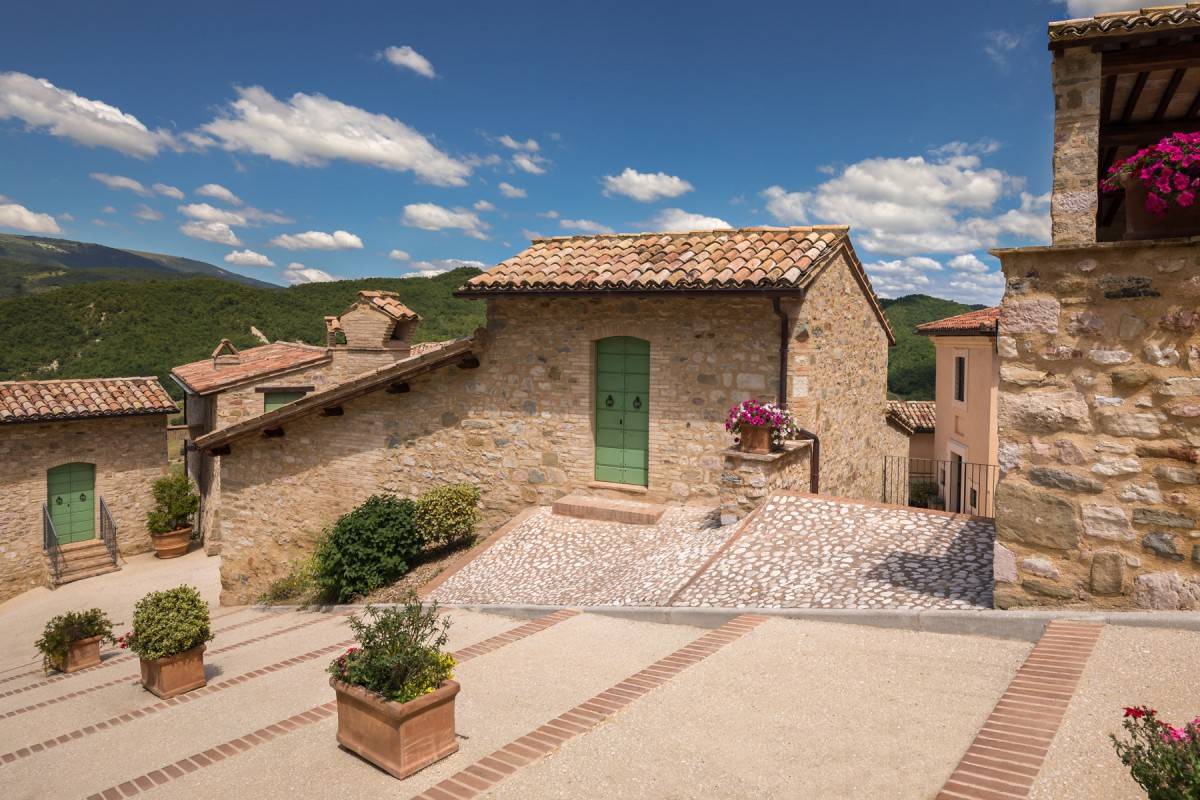 With its apartments, the little square, common areas with table football and barbecue, it is ideal for spending warm evenings in the company of friends and family. 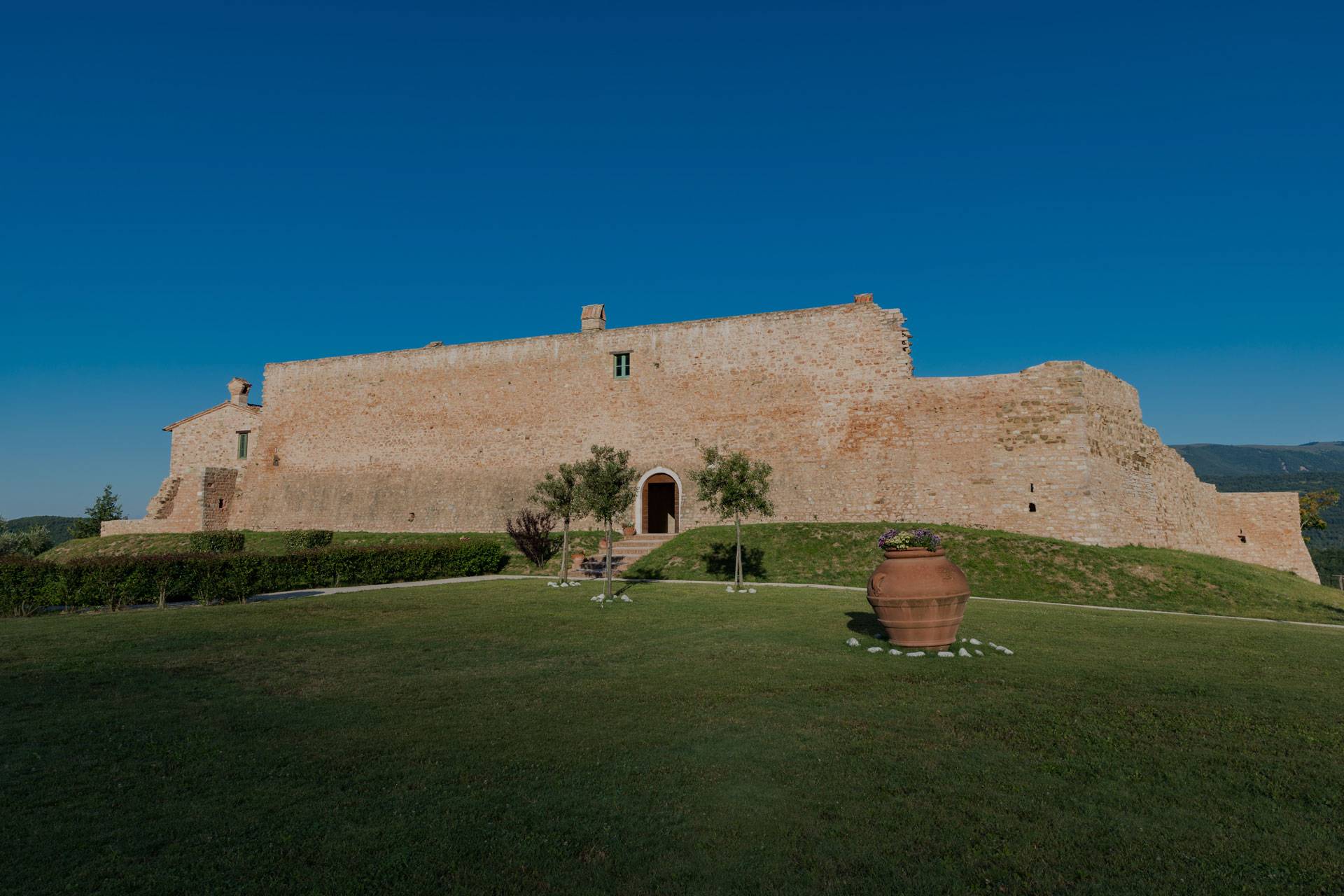 It is the most panoramic part of the Borgo. Here you will find a playground for the children and a big green space where even dogs that are welcome can enjoy the lows.

CASTELLO DI GALLANO HAS AN ANCIENT HISTORY THAT LEADS BACK CENTURIES…

In the roman period, the small village of Gallano became an important post thanks to Via Consolare Flaminia (220-219 BC), which in the past traversed the valley below. This artery was fundamental to the great Roman Empire since it connected Rome to Northern Italy, particularly the road which went from Rome to Rimini, the ancient city of Ariminum. Even today, we can still admire important remains of arches of the bridge called Centesimo, so called because it was one hundred miles from Rome.

In 1085, Gallano became the seat of an important Benedictine monastery under the name of Santo Stefano; after several incursions and attacks, during the riots that marked the Italian peninsula in the last decades of the twelfth century between the Communes and the Emperor, the Monastery was fortified with imposing walls and bastions, so that it became a true fortified Castle. It was the great Emperor Federico I, “Barbarossa”, who in 1155established the figure of Count Gallano, recognizing the place as one of great importance. In 1350, the Monastery was definitively abandoned, for unknown reasons, but remained in the hands of the Church. Only in 1383 Pope Urban VI gave it to the Trinci, the township of Foligno, which earned them the office of Viscount.

At the end of the brief Trinciana period in 1439, the Monastery was brought back under the direct control of the Church and so remained for several centuries. During the Trinci domain, the church of San Sisto was frescoed by the famous painter Pier Antonio Mezzastris and, in 1891, one of these frescoes was removed and allocated to the cathedral of Foligno, where it is still preserved today.

According to the lively oral tradition in this part of Umbria, the Monastery was left in a state of disrepair to the mercy of the seasons and that only in the beginning of 2000 did it resume its original aspect.

In 2008, after almost 40 years of total abandonment of the village, the Becca family fell in love with the charm of the estate and the grandeur of the dwelling and decided to face a challenge: bring it all to new splendor, transform the Site into a charming, elegant and exclusive resort, while respecting its history. After careful restructuring and restoration work, the Castle returned to its original splendor, preserving its original medieval structure with its small patron church named San Sisto di Gallano. In 2015, the family was given a Certificate of Praiseworthy Partecipation as a worthy interpreter of UNESCO Values in safeguarding and protecting the landscape and the environment, within the Competition “LA FABBRICA DEL PAESAGGIO”